The summer heat and humidity is planning to arrive later this week, so in an effort to beat the heat, we will start our Sunday Distance Run an hour earlier, effective Sunday, June 2, 2013. The 7 a.m. start time will be in effect through September 1st, as reflected on WRC’s calendar.

Michaela is departing for her summer internship in the Olympic city of Rio de Janeiro (BRA). And Dan is destined for Durban (RSA), Pietermaritzburg, and all points in-between for the Comrades Marathon (54 miles). Good luck to them both!

With all the new members and visitors finding us, let’s mark the occasion with a club photo before kicking off the next Sunday run. We’ll have it posted and captioned online lickety-split. 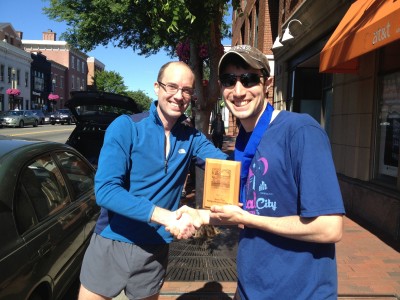 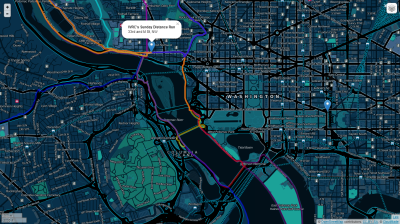 Some of our favorite Sunday running routes, dressed up in blue.

A question that people new to WRC often ask, even after reading the FAQs, is “Where do you do these 8 to 20 mile runs together, anyway? What does it all mean‽”

And the answer is always “… it kind of depends,” because we have a lot of different paces on offer, and a lot of different favorite running routes in store! And like hurricanes, Winter Storms, Magicicada broods, or fancy mixed drinks, these quality routes have names! Allow me to introduce you to two of them, and a map of all of them. END_OF_DOCUMENT_TOKEN_TO_BE_REPLACED

The Washington Running Club garnered recognition over the weekend as several members ran in Sunday’s Capitol Hill Classic 10K under the club’s team.

WRC finished in a respectable 7th place out of 44 teams (results). Finishers had their club name—Washington Running Club in our case—called out over the public address system as they finished.

Rachel Clattenburg (42:08), Julia Taylor (43:44), and Jerry Paulson (48:19) comprised the WRC team scorers. Julia finished second in her age group, getting nipped by a mere 11 seconds. Christine Hackman finished in fourth in the same age group while netting a 46:35.

Dan Yi—running for the Civil Rights Racers—ran an impressive 37:07 the day after running 30 miles in preparation for the upcoming Comrades Marathon on June 2nd.

The 10K’s team competition counted the top 3 finishers on the team with at least one being of the opposite sex.

Christine Hackman has the highest age-graded score on the women’s side with a 73.22%. Julia Taylor is just behind her with a 72.53%.

The age-graded scoring system is meant to account for age in performances and give runners of all ages an equal chance to compete on the same scale.

Runners must compete in 5 races to qualify for the Grand Prix—at least 4 from the selected races in the series, with the option of one performance from outside. The standings above don’t yet reflect the one elective race.

The next race in the WRC Grand Prix is the Lawyers Have Heart 10K on June 8.

Lured by the promise of an f-heavy offering (fresh fruit, farmer’s market frittata, and French press coffee), WRC’s Board of Directors convened this morning in Arlington at Masterson Manor, for their second quarterly meeting. All serving members were in attendance, and a lot of ground was covered. In a nutshell, the state of the club is very strong, and we’re making lots of progress on all fronts.

While the official minutes will be reported in the upcoming May edition of the WRC Newsletter (please subscribe here or here), there are a couple of line-items that bear immediate reporting:

Also, the next Quarterly Board Meeting has been scheduled for Saturday, August 17th, time and location both TBD. Please check the WRC Events Calendar, where we will keep all of these important details up-to-date.

Like I said, there’s a whole lot of other material that will be covered in the official club minutes. But for right now, this is the stuff that’s at close range and makes the pulse react. 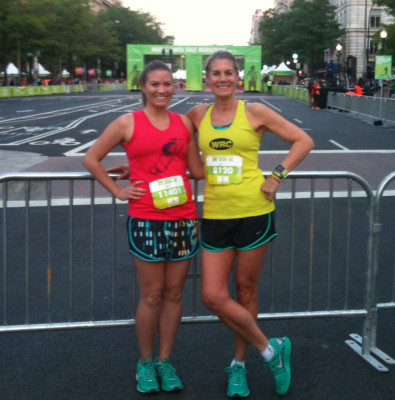 Carla Freyvogel poses with her daughter, Grace Eginton, in their respective club singlets and matching teal sneakers, in front to the NWHM Start/Finish line, at 10th and Pennsylvania Ave, NW. Photo courtesy of W.T.F.

Race day started as the best of all running weather days. Cool, sunny, low humidity. It was really Washington DC at its finest; the monuments glowed white, the streets were clean swept and the trees were a new green. A great day to run a half marathon.

15,000 women and Dan Yi did just that. END_OF_DOCUMENT_TOKEN_TO_BE_REPLACED