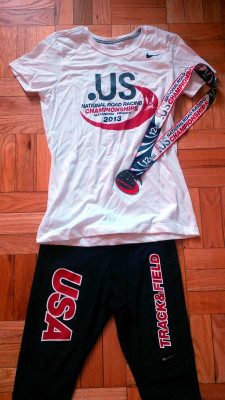 So, let’s get the business part of this report out of the way.

The first of the .US Road Racing Championships, sponsored by USATF in collaboration with a new sponsor, Neustar, gets a spotty report card. Can I say that and still keep my good standing in USATF? Hope so.

The race course gets a solid A. The plentiful and emotionally invested police officers of the City of Alexandria get a good A. The staff of USATF and the boatloads of volunteers, happy to help and cheerful, ALL get As. And, the weather was an A+++ for a distance event.

But, some of the administrative details deserve, well, attention to detail. The online registration was cumbersome and hard to follow. And, you know, if I say that, you can dismiss it. If Julia Taylor says that, they need to pay attention.

As your determined PR person, I was crushed, crushed I tell you, to see that my WRC affiliation did not show up on the website along with other clubs. I called. I emailed. I was told again to verify my age and promised the change would be made, but no luck. And, then, at packet pickup things really fell apart when I was given “my packet” and only at the last minute and by mistake, found out that the packet I was holding did not entitle me to participate in the Masters Championship. That packet was at a separate table, with a separate set of numbers, including the official age-defining back bibs.

With these glitches behind me, it was a good event. I was quite thrilled to be whisked into the elite warm-up area as a now confirmed masters championship participant. My friend, Bess (community race participant) was able to scoot in with me by ducking under my shirt. Together, we watched Shalane throw her legs into the air and twist around on the ground. We were really impressed. Bess suggested that maybe we too needed to be doing this! We enjoyed the super short porta-potty lines as well as oogling all the long legs and lean arms.

We bumped into Suzy Coffey and Julia Taylor, all of us being, you know, elites. Julia and I looked sharp in our WRC singlets. I am absolutely sure that Rachel Clattenburg and her husband will be fielding calls from the Oregon Track Club. They looked pretty envious! Who needs green and some random tree when you can have dramatic colorific punch and list all the cool places you run?

It was time for the Masters Championship to start. We lined up and hugged, you know, wishing each other luck. The horn sounded and we were off. One slight glitch at this point was the fact that the “community race” had the corral behind us. Some of those folks are pretty fast and very competitive. When the horn sounded, these fast youngsters practically trampled us oldsters to death! It was actually a bit scary.

But by about 400 meters, things calmed down. Julia was up there, followed by Suzy. I was trudging along. Bess was picking flowers in the back, as she only starts to gain speed after about 16 miles.

As I said,the course was very nice. My goal was to run evenly and to get under 9 minutes per mile and not faint. I was feeling tired, actually, at 1 mile and got it at 8:10. This was a good thing as I run the risk of going out way too fast. We cruised down King Street and then through some neighborhoods. Then out into what appeared to be acres of a newly constructed and suburban Alexandria. Bess picked up speed sooner than I expected and passed me at 2 miles.

There was an alarming out and back segment that seemed to go on forever. That was really the only place that bugged me. I was looking for my friends and anyone else I might know and it seemed to be ages before they came running toward me. I thought that maybe they were running badly but it was just such a long, boring road. I saw Ted Poulos and cheered for him. Julia yelled for me but I had my face splashed with water. I saw Suzy looking determined. Bess looked like she was dancing. At some point, Amanda Hamilton came up next to me and we ran a few steps. Gave her the pitch! Time to come out with us again.

The last 2.5 miles went smoothly and I was happy to see my watch holding strong at 8:30 ish pace. After suffering the boringness of the suburbs, it was nice to be on the scenic and familiar streets, filled with fans.

But the best part of the finish was hearing Bill on one side and the official WRC cheering squad (Dan Yi, Jen Maranzano, and Alan Pemberton) on the other screaming my name. They were all really, really loud. Bess said they yelled for her too. So, nice team support, team. Thank you!

The awards ceremony hit a balance of celebrating (and PAYING) the elites and keeping the fun runners, families and kids happy with the Running Presidents and beer. Once again, the weather cooperated with sun coming out and a soft fog lifting off the Potomac. No doubt this will seal Alexandria’s appeal for future events.