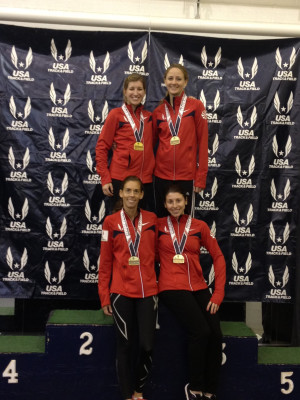 On Friday afternoon, Laura tackled the 3000 Meter race—her first ever. She crushed the competition, beating the next woman in her division by over a minute. After her race, she watched Orville Rogers, 95 years old, race to a 3000 Meter world record for his age division. The entire crowd stood to cheer on Rogers during his final laps. “To see such an athletic feat at that age was nothing short of amazing,” says Laura. Rogers would go on to set six world records at the meet.

Laura returned to the meet on Saturday for the 4 x 800 Meter Relay. Joining her on her relay team were two of her teammates from her days on the GW Cross-Country squad, as well as their GW Cross-Country coach. This is the second year the four of them have turned the Masters Indoor Championships into a GW team reunion. They won the non-club heat for their division in 11:01.23.

Laura managed another impressive feat at the meet which is not reflected in the official results: she raced in a pair of flats purchased the day before the meet, which she did not run in at all before lacing them up for her races. This is the second time Laura has raced in shoes she has never run in before. The first time was during last year’s Chicago Marathon. She did not have any issues during that race either. So if you want help picking a pair of shoes, I recommend talking to her.