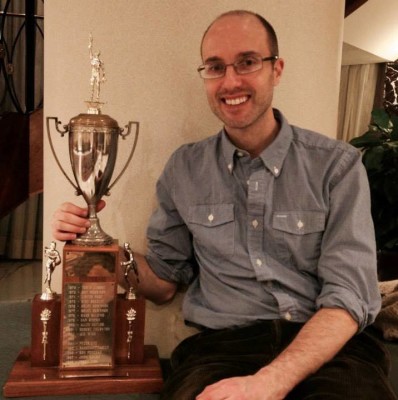 Kit Wells proudly displaying the tomFelde Trophy at our 2013 annual meeting and party.

Believe it or not, another running-filled year has passed, which means it’s time to vote for the recipient of the 2014 Alfred tomFelde Trophy! This award is one of WRC’s highest honors and commemorates one individual who provided exceptional service to the club.

Since 1972, there have been 29 recipients of the award, many of whom are still active members of the club. Last year, the tomFelde Trophy was awarded to Kit Wells for his outstanding redesign of the WRC website and maps and overall promotion of the club.

Send an email to lauren@washrun.org by Sunday, February 15 to cast your vote!