Breaking news, via the magic of SMS/MMS: 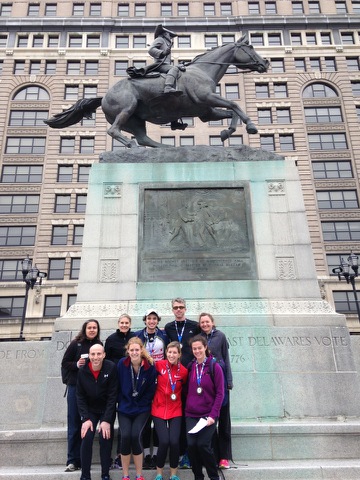 Nine decorated WRCers, standing in front of the equestrian statue of Caesar Rodney at Rodney Square in Wilmington, DE. Like our runners, the horse is depicted in full gallop.

Bolstered by good competition, close to perfect running weather (low 40s, overcast, breezy), and the promise of pizza and cupcakes after the race, WRC turned out some fantastic performances this morning. Ben Stutts led the way with a 16th place showing and his first sub-1:20 in a half marathon. Drew Killian ran close to his PR for 42nd place, and Rachel Clattenburg wowed with a 4th place finish among women. Particularly impressive about Rachel’s performance were her negative splits and the way she dropped the hammer during a long, challenging uphill climb between miles 6 and 9. Emily Buzzell ran a very evenly paced race to finish as the 7th woman. The team scoring was rounded out by Laura Jennings, who ran a 5-minute PR and finished in the top 100. Race organizers only allowed for scoring of the top-5 runners, but Jesse Frantz, Kendall Tucker, Carla Freyvogel (in her bold WRC singlet), and Claire Tsoukalis all ran stellar races as well.

WRC drove away from Wilmington, DE, today with some nice hardware, and we hope to return next year and do it all over again!

WRC budgeted $100 in travel money, to send its members to race together. Talk about a return on investment!