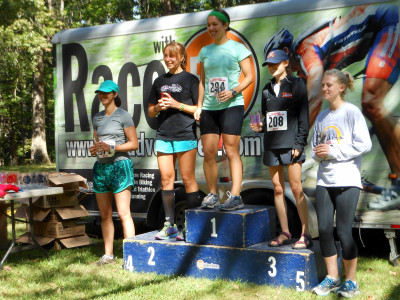 Hillary Tipton atop the podium at the EX2 Off-Road Half Marathon. Photo courtesy of Bill Tipton

WRC was well-represented at yesterday’s EX2 trail races at Prince William Forest Park. Ben won the 10K outright and I the half marathon among the women. We also managed to chat up two potential 2014/15 recruits.

Both courses were hilly, single-loop and almost entirely on the park’s hiking trails (map). The half included a very-much-hands-on rock scramble and waterfall. Though my finishing time was nothing to brag about, (here’s hoping I’ll have a road half to my name soon), I would highly recommend the race to anyone thinking of trying out trail racing. The field was small at about 100 in the 10k and 200 in the half, but I’d say most were seasoned trail runners.

The race organization could be described as “small but but well-heeled”—we each took home a $99 Patagonia duffel bag, two pint glasses and a couple of t-shirts. Lots of friendly sponsor reps too, the best being The Bike Lane for letting me test-ride a Trek Speed Concept.

My dad was all-too-happy to capture my first-ever podium experience on camera. I’ve attached a few of the better shots. 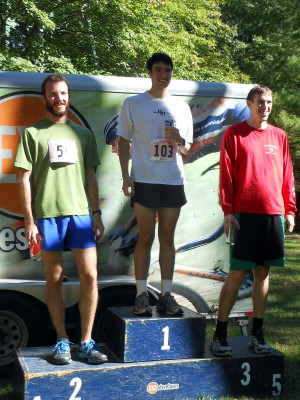 Ben Stutts atop the podium at the EX2 Off-Road 10k. Photo courtesy of Bill Tipton 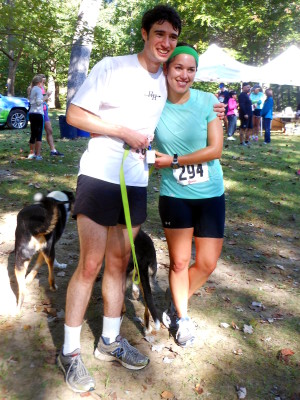